Dems fear Sinema's still not there on a prescription drug plan

Dems fear Sinema's still not there on a prescription drug plan

Joe Biden has a problem, and a tight time frame to fix it.

The deadline to reach an agreement on the president’s social spending package hits in a matter of weeks and Democrats have yet to bridge their differences over one of the most important components: How aggressively to take on drug prices.

“There’s not 50 votes for anything yet,” said Rep. Scott Peters (D-Calif.), a pharmaceutical industry ally who is pitching House and Senate centrists on a narrower plan than the one party leaders were counting on to fund planned expansions of Medicare, Medicaid, Obamacare and home health care.

In particular, Peters said, Sen. Kyrsten Sinema (D-Ariz.) hasn’t wavered from her stance nearly a month ago opposing the current drug price reforms up for debate.

“Senator Sinema is not yet for any proposal to deal with prescription drugs,” he said in an interview this week. “And I’m trying to get her to come my way because I think frankly, I think it would just be good to put this issue to rest.” 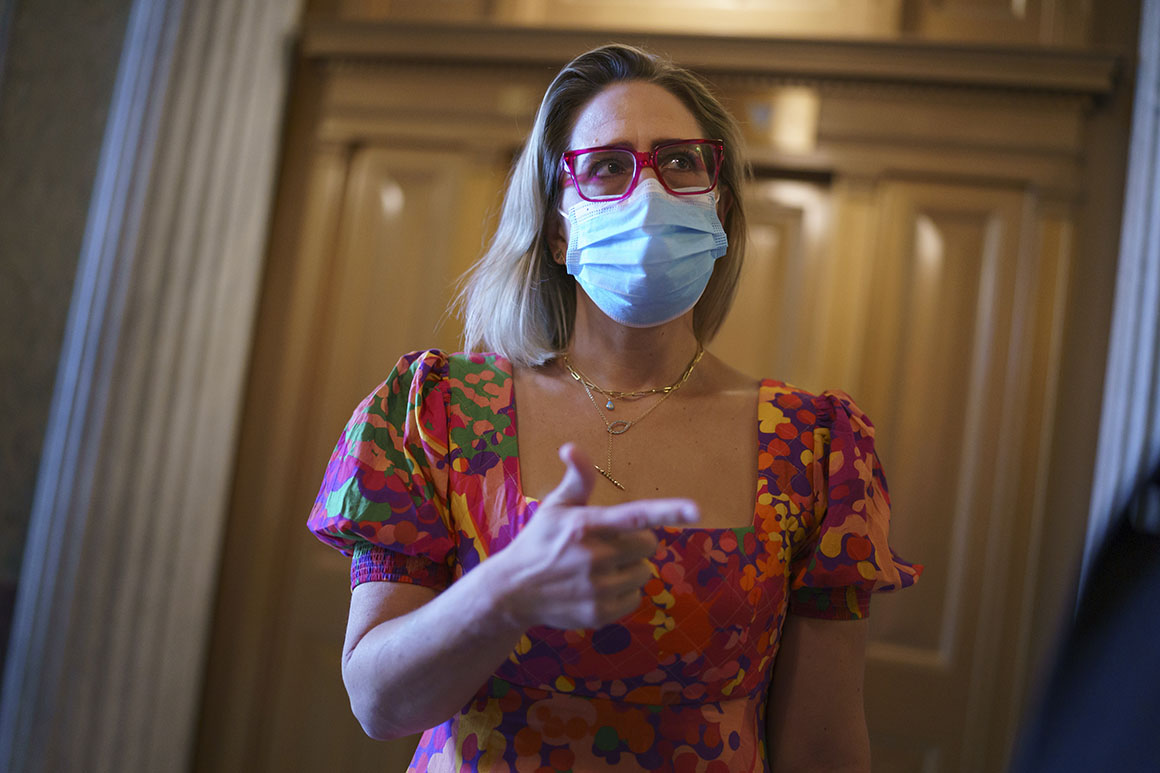 Sinema’s spokesperson John LaBombard refuted Peters’ characterization of the senators’ position, saying Sinema is “carefully reviewing various proposals around this issue” in her “direct negotiations” over the $3.5 trillion package. Sinema generally supports the idea of lowering drug prices but has declined to say what, if any, proposals she would back.

Nevertheless, the inability to reach a consensus on the issue of prescription drug prices is just one of many hurdles remaining for Democrats as they race to meet their new October 31 deadline. Though a number of other Democrats are known to be hesitant to support the drug pricing provision, Sinema’s support is absolutely necessary in the 50-50 Senate. To reach a breakthrough, Biden’s team is increasingly involved in shaping the talks as they decide how many programs to trim and which to slash entirely from the plan.

For months, the White House had largely deferred to leaders on Capitol Hill to iron out disagreements around the pivotal prescription drug policy. But in recent weeks, it’s actively reached out to moderates in the House and Senate to press for their support and has stressed the importance of drug pricing in meetings with lawmakers. Peters said the White House has more directly engaged him on drug pricing recently and that “we understand where each other is better.”

White House officials have also taken notice of the unlikely agreement between Sens. Bernie Sanders (I-Vt.) and Joe Manchin (D-W.Va.) on allowing Medicare to negotiate drug prices, and consider the provision one of many big priorities in the package, according to a source familiar with the administration’s thinking. Lowering prescription drug costs is one of the more popular elements of Biden’s plan and many Democrats see it as key to their success in the 2022 midterms and beyond. That’s particularly true as prior pledges to lower the age of Medicare and create a public insurance option have been sidelined. 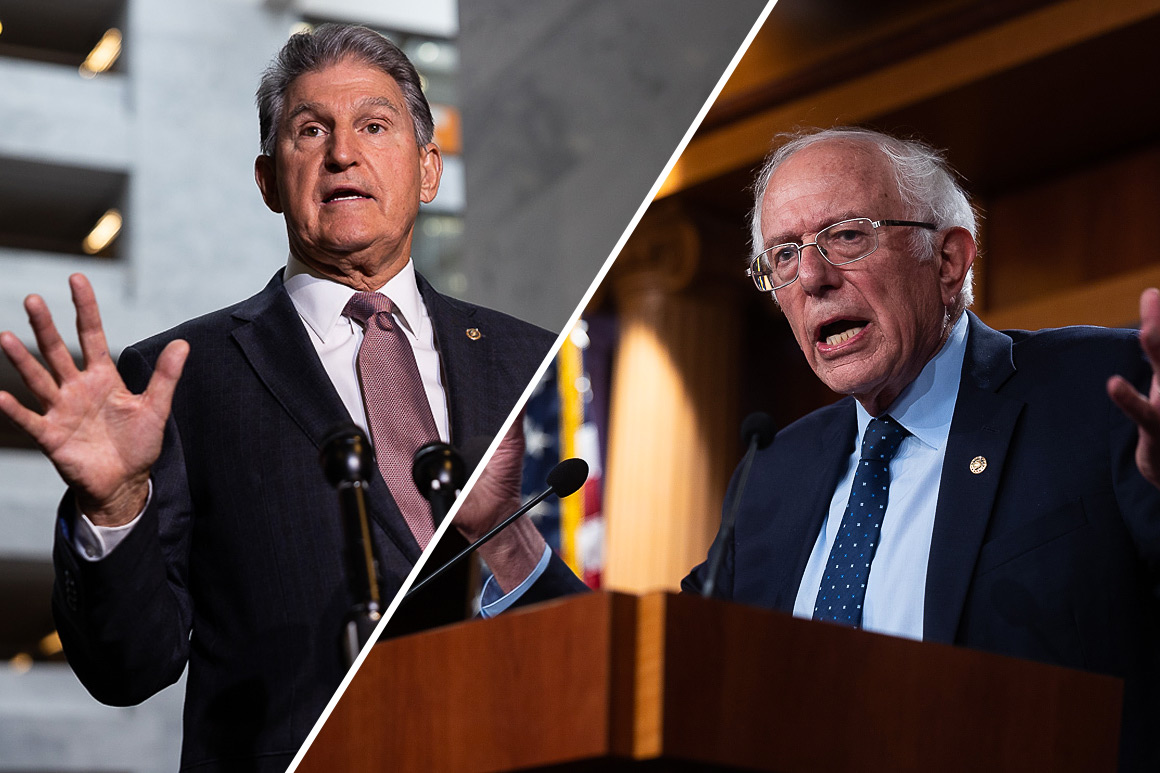 Many lawmakers, including Peters, say they’re confident they can still find a middle ground between the sweeping HR.3 bill favored by progressives that would empower Medicare to bargain directly with drug companies, and the version pushed by House centrists that would negotiate lower prices for a far narrower set of drugs. The members argue a watered down drug negotiation bill may be the best they can hope for given Democrats’ narrow voting margins and an onslaught of opposition from the pharmaceutical industry.

“There will still be some [drugs] that will stay at the higher price, but that’s the way the compromise is getting worked out,” said Rep. Susan Wild (D-Penn.), a frontline member active in the talks on the policy. “I’m okay with that if that’s what we need to get it through. But I still cringe at the idea that Americans would ever pay more than other countries for an identical drug. I just think that’s outrageous.”

House progressives, outside advocacy groups and Sanders are still pushing for the most aggressive version of the bill possible and are accusing those who oppose it of shilling for the pharmaceutical industry. People in this camp say they’re worried that a narrower, more moderate prescription drug bill will fail to generate the federal savings necessary to pay for the party’s plans to expand Medicare, Medicaid and Obamacare, and fail to deliver on campaign trail promises to substantially cut health costs for patients.

Though negotiations are continuing behind the scenes, lawmakers in both camps say they lack clarity on where one another stands.

“I have heard that [Sen. Sinema] is opposed to have Medicare negotiate prescription drug prices,” Sanders told reporters on Thursday, lamenting that he has not heard directly from her on what she is willing to vote for. “That’s what I have heard. Maybe I’m wrong.”

Sen. Bob Menendez (D-N.J.), a key unknown on drug pricing who has previously slammed his colleagues for using the pharmaceutical industry as a “piggy bank” to pay for other priorities, is also frustrated by a lack of specifics.

“Discussions versus actually receiving a proposal are two different things,” he said. “Show me a proposal and I’ll tell you how I feel.”

Members of Congress and outside advocates said the recent showdowns on raising the debt ceiling and passing a temporary spending bill have distracted them and eaten up valuable time they could have spent working on the drug pricing provision and other pieces of the reconciliation bill.

And with just a few weeks left to come to an agreement, the list of unresolved questions around the bill remains long. How many and what kind of drugs will be subject to negotiation? Will the government use an international or domestic benchmark for those negotiations, and how will they penalize drug companies that refuse to comply? How much can the government claw back from companies that raise their prices faster than inflation?

Another key hang up around the bill is whether Democrats can and should apply the prices Medicare negotiates outside of Medicare, so that people who get their insurance through work or on the individual market can benefit.

Many lawmakers and outside advocates say the Senate parliamentarian is likely to nix an attempt to extend the lower prices to private insurance plans, though her office has yet to formally rule on the question. Some are already arguing that losing the broader policy is an acceptable sacrifice.

“History shows that changes made in Medicare almost always migrate to the private sector,” Senate Finance Chair Ron Wyden (D-Ore.) recently told reporters. “Because Medicare is the flagship federal program, and when the private sector learns about [the lower drug prices], they’re going to insist on it.”

Hanging over the entire debate around prescription drug policy is the prospect of failure and what it would mean for both the Democratic Party and the larger bill itself. Some in the party fear it would be tempting serious backlash, for instance, if it promises to lower drug prices across the board but leaves out the majority of the country enrolled in private insurance.

“I don’t think it’s going to be pretty popular to tell voters: ‘Sorry, you’re too young to have access to affordable prescriptions,’” one advocate familiar with the negotiations told POLITICO.

Sanders agreed, telling POLITICO Democrats should still fight for the policy’s inclusion even if it’s at risk of getting eliminated by the parliamentarian, rather than preemptively taking it out.

Democrats are also warning that if lawmakers scale back the prescription drug policy too far, it will force them to make additional, painful sacrifices elsewhere.

“HR.3 came up with a certain amount of revenue,” Rep. Peter Welch (D-Vt.). “What if, suddenly, that revenue is cut in half? That will really adversely affect what we can do on health care, and members will get upset about that. For every action there are collateral reactions.”